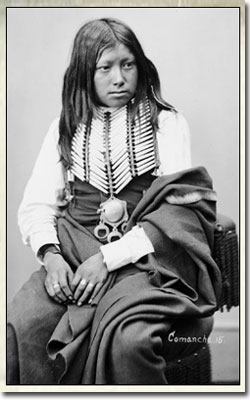 In the absence of written records, there’s not much we can say about Buffalo Hump’s early life.  Historians believe that he was likely born in the 1790s.  In 1838, he and two other Comanches visited with Sam Houston to sign a treaty.  We ought to recall that Sam Houston spent many years among the Cherokee and given his Indian policies in the early days of the Texas Republic, many Texians suspected him of being more red than white, particularly when it came to Houston’s reigning in the efforts of Texas Rangers to suppress Indian depredations.

As stated, not much was known about Buffalo Hump (Indian name: Potsu-nakwah-ipu) until the Council House Fight of 1840.  To reiterate previous essays about the Comanche, they were not a unified nation in the same way as eastern tribal confederations. Comanche alliances were situational conveniences.  In the case of the Great Raid, the marauders were mostly of his own band and any whom he might have recruited from other tribes, including Kiowa.  Buffalo Hump didn’t object to the killing of the Indians at the Council House Fight as much as he objected to the betrayal of the concept of a council.  This is but one example where we can clearly see how differences in culture and misunderstanding can result in hostility.  The power behind the Texian negotiators in San Antonio was Sidney Johnson, who as far as I can tell, didn’t value anyone who wasn’t white.

The so-called Great Raid, led by Buffalo Hump, was a substantial foray into the land of the yellow hair.  It ranged from the West Texas plain into settlements as far east as Victoria and Linnville.  Established in 1831, Linnville was located at Lavaca Bay and by 1840, was the second largest port city in Texas.  Comanche raiders completely destroyed Linnville; it was never rebuilt.  The settlers that survived did so by getting into boats and rowing out into the bay. After the raid, Linnville residents established Port Lavaca, some three miles from what was once Linnville.

After the Indian assault on Texian settlements, Buffalo Hump and his band headed back to West Texas. En route, they were attacked by Texas Rangers and militia from Gonzalez and Bastrop.  This confrontation would become known as the Battle of Plum Creek, near Lockhart, Texas.  It wasn’t so much a fixed battle site as it was a running fight that went on for fifteen miles.  Texas Rangers had the advantage of being armed with the new Colt revolver.  Up to 80 warriors were killed in this dustup, likely an accurate figure even though only twelve bodies were recovered: Comanche routinely did not leave their dead on the field of battle.  The Indians that managed to get away did so with about 2,000 stolen horses and mules and a large assortment of plunder taken from the homes they destroyed.

Most of these Comanche may have initially escaped the Texas Rangers, but if one is looking almost exclusively at vengeance, white settlers had the last word.  In 1840, there were approximately 35,000 Comanche living in West Texas. Today, the Comanche number around 1,500; most living in and around the reservation at Fort Sill, Oklahoma.

Buffalo Hump again met with Sam Houston in 1844 demanding that all whites remain east of the Edwards Plateau.  Houston tacitly agreed to these demands and to demonstrate his goodwill, which was an Indian tradition, Houston gave Buffalo Hump valuable gifts.  Looking back in time, Houston was either dishonest or naïve.  By this time, the flow of settlers to Texas could not be stopped.

When it became obvious that Houston could not or would not keep his agreement, the Comanche resumed their attacks upon white settlements.  Believing that the only solution to Indian depredations was the eradication of all Indians, the Texas Rangers exacted terrible revenge upon the Penateka rancherias. Within two years, Buffalo Hump sued for peace with the United States government at Council Springs.

In 1849, Buffalo Hump agreed to guide an expedition formed by John S. Ford and Robert S. Neighbors to explore and map the region between San Antonio and El Paso.  The expedition mapped the route and produced a valuable report of their findings.  The route they followed later became known as the Ford-Neighbors Trail.

Buffalo Hump continued his hostility toward whites until around 1856 when he led his people to the Brazos River Reservation.  None of these Comanche were happy at the reservation, however.  They were constantly threatened by horse thieves [1] and squatters.  They didn’t like the restrictions placed on their movements, and their lack of food forced Buffalo Hump to move his band away from the reservation in 1858.  While encamped in the Wichita Mountains, the Penateka were assaulted by US Troops under the command of Major Earl Van Dorn [2].  Dorn, unaware that Buffalo Hump had signed a peace treaty at Fort Arbuckle, killed around 80 Comanches during the attack.

In 1859, Buffalo Hump settled his remaining followers on the Kiowa-Comanche reservation near Fort Cobb in the Indian Territory (present-day Oklahoma).  Despite the stressful nature of his forced existence, Buffalo Hump requested a house and land so that he could learn to farm and serve as a good example to his people.  Potsu-nakwah-ipu passed away in 1870.

[1] It is likely that the horse thieves Buffalo Hump complained about were other Comanche.  No one was more adept at stealing horseflesh than the Comanche.

[2] Earl Van Dorn was a great-nephew of Andrew Jackson, an officer of the U. S. Army who served with distinction during the Mexican-American War, a skilled Indian fighter, and a general officer of the Confederate Army during the War of Yankee Aggression.  Van Dorn was killed in 1863, but rather from a union bullet, as one might expect, it was a bullet from the husband of the woman with whom he was having an affair.

PERSPECTIVE FROM AN AGING SENIOR CITIZEN

This blog is dedicated to Andrew Breitbart. I believe this header picture was taken by Mr. Z on a beautiful Santa Monica day! Jersey Jack, we miss you!

A Medievalist's Perspective on Anime and Religion

A MAN OF ACTION

Life is either a daring adventure or nothing.

Living: All Day Every Day: Then Chattering About It