What most of us learned about the Old West, as kids, was what we saw at the cinema and on early black and white television.  It was great fun.  In my day, we all looked forward to the Saturday matinees and serials.  Matinee admission, 35-cents.  Popcorn, 15-cents.  Candy bars … I think also around 10-cents, but back then 60-cents was a lot of money.

Most of the films we saw on Saturdays were re-runs from previous decades.  Cowboy films weren’t the only matinee or serial fare, but given the choice between Tarzan the Ape Man, Dick Tracy, and John Wayne films, Wayne was always my first choice.  Gene Autry was okay, but he wasn’t John Wayne.  I don’t recall The Duke ever singing anyone into jail.

The fact is that the movies were —well— movies.  No one was ever really shot, no one ever died, no one went to jail.  It was make-believe.  In order to sell a pretend world, it was necessary to exaggerate plot lines with unrealistic suppositions.  Hollywood was not the real old west, and movie stars were nothing like actual old west lawmen and outlaws.  In the real old west, there was a very thin line between lawman and outlaw; they quite often changed sides —maybe even more than twice, and no one could tell who the good guys were by the color of their hats.

In terms of gunfights, there were nowhere near the number suggested by Hollywood films and few gunfights were manly confrontations in the middle of the street at high noon.  Hardly any of them were pre-arranged challenges —and no one discharged a revolver at someone else more than 25 yards distant with the expectation of hitting anything other than an unsuspecting bystander.  Now the reason for this is that in the real old west, few people ever “slapped leather.”  Some men carried their six-shooters in holsters (mostly worn on the left front of their bodies for a cross-body draw), but most gunmen carried their guns stuffed into their waistband or in the pockets of their outer garments.  A man putting his hand inside his pocket during an argument made everyone nervous.

Gunfights did erupt (although not often) and when they did, the shooters were frequently standing close together.  Then, when the guns started blazing, it was common to see both shooters scurrying out of the way.  That scene in the film Tombstone, where Doc Holiday ran with his head down toward the building shooting at Ike Clanton was probably an accurate representation.  No one wanted to get shot, much less getting shot in the face.

Often, though, old west shooters were little more than assassins and dry gulchers.  They shot at other men from behind cargo wagons or from a second-story window looking into the street.  It wasn’t only a single shot, or even two (tap, tap); in most cases, the damn fools emptied their revolvers, their aim offset by rot-gut whiskey. The winner of the contest was the last man standing, but occasionally no one remained standing.  Then, with a room full of gunsmoke, no one was sure who shot first, or even, who shot whom.  The reality of old west gunfights wasn’t very manly, or romantic, or something a ten or eleven-year-old would want to see at a Saturday afternoon matinee.

In the late 1870s, two railroad companies competed for dominance in Colorado.  Atchison, Topeka, and Santa Fe Railroad challenged the Denver and Rio Grande Company for the right to lay track through Raton Pass.  Both companies had lines into Trinidad, Colorado and the pass was the only possible access to New Mexico.  Both companies took the matter to the courts, but as that battle was unfolding, the companies also threatened each other with violence—railroad gang against railroad gang.

To gain an edge, Atchison, Topeka, and Santa Fe hired gunslingers from Dodge City to intimidate the Denver and Rio Grande workers.  Faced with this threat, and running out of money, Denver and Rio Grande were forced to cede the pass and the matter was resolved without bloodshed.  In 1879, however, a silver strike in Leadville, Colorado brought the struggle back to life. 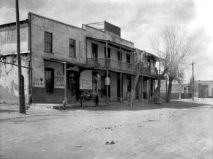 With Kansas now an unfriendly place for Masterson and his cronies, many migrated to Las Vegas, New Mexico, a small town established on the edge of the eastern plains, in the foothills of the Sangre de Cristo Mountains in 1835.  If anyone thinks that Dodge City, Kansas was bad news, or Tombstone, Arizona —Las Vegas, New Mexico was far worse.

Because of its location on the Santa Fe Trail, some 600-miles from Kansas (a long way in an ox-pulled wagon), the townspeople prospered.  By the time folks arrived in Las Vegas, whiskey and women were in high demand so the enterprising folks in Las Vegas provided such comforts.

By 1860, Las Vegas had grown to around 1,000 people and from then on, the population exploded.  By the time the railroad made its way to Las Vegas in 1879, it had become the largest city between Independence, Missouri, and San Francisco, California.  To maintain its control of development rights, the railroad established a train depot one mile outside of town, the effect of which created a rival town —East Las Vegas (east of the Gallinas River) and West Las Vegas.

With six trains stopping at the Las Vegas depot every day, the railroad was a steady conduit for businessmen, investors, respectable residents, and an assortment of toughs from Dodge City, Kansas.  The toughs included rough-shod people who were wanted for murder, robbery, and thievery; they were gamblers, prostitutes, swindlers, vagrants, railroad tramps, and Gunslingers.  Notable among these were Doc Holliday and his woman (known as Big Nose Kate), Jesse James, Billy the Kid, Wyatt Earp, Bat Masterson, Dave Mather, Dave Rudabaugh, J. J. Webb, Hoodoo Brown, and a fellow known as Handsome Harry.  Others went through Las Vegas, too, at one time or another … Black Jack Ketchum, the Youngers, Doc Middleton, and Bob Ford.  Bad fellows.

Shortly after arriving in Las Vegas, John “Doc” Holliday put out his dentist’s shingle, but the effort was short-lived.  No one wanted a “lunger” breathing into their face, so Doc put his shingle away for the last time and went into a partnership with John Joshua Webb in the purchase of a saloon.

On 19 July 1879, Doc and Webb were sitting at one of the gambling tables in their saloon when a local tough by the name of Mike Gordon suddenly erupted with rage at one of Doc’s dancehall girls (a euphemism for prostitute).  Gordon wanted the woman to go away with him and she wasn’t inclined to do so.  The furious Gordon began cussing and kicking chairs out of his way as he made his exit from the saloon.

Doc calmly got up from where he was sitting and followed Gordon into the street.  Just as Holliday reached the doorway, a shot from Gordon’s pistol whizzed past him.  Calmly pulling his revolver, Holliday shot Gordon.  One-shot was good enough and Gordon fell into the dusty street.  Gordon died the next day.  When Doc learned that he would likely be held for trial, he fled to Dodge City. 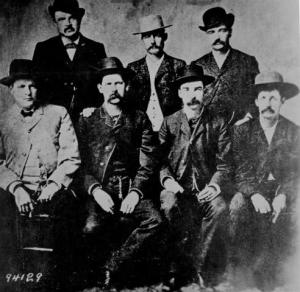 It may have been this incident that led to the creation of the so-called Dodge City Gang, a loose association of Kansas gunmen formed around Hyman G. Neill, who was also known as Hoodoo Brown.  Not long after he arrived in Las Vegas, Neill ran successfully for Justice of the Peace.  As Justice of the Peace, he was also the de facto East Las Vegas mayor, responsible for hiring town lawmen.  Also serving as coroner, Neill decided if or when to convene a coroner’s inquest to a shooting.  Most of his friends were appointed as members of the coroner’s court.

With his friends hired as town marshals/deputies (J. J. Webb served as town marshal, appointing Dave Mather, Joe Carson, Dutch Schunderberger, and “Dirty Dave” Rudabaugh as deputies), Neill was well placed to protect his friends and profit from his control over ELV gambling establishments.  Note: the picture shown (above) is of the Dodge City, Kansas “Peace Commission,” which included some of the members of the Dodge City Gang operating in Las Vegas, New Mexico.  “Neil Brown” (a.k.a. Hyman G. Neill/Hoodoo Brown) is seated on the far right.

A few of the gang members supplemented their incomes by committing crimes, such as robbing local stagecoaches.  In this endeavor, men were murdered.  By the summer of 1880, townsfolk had grown tired of the lawlessness and formed vigilance committees.  Hyman Neill might have hanged but forewarned he quickly departed from New Mexico and headed for Houston, Texas.

No one knows for certain what happened to Hoodoo Brown.  Some contend he was killed in Coahuila, Mexico, others say he found his way to Leadville, Colorado where he lived out his days with the widow of one of his former Las Vegas deputies.

Marshal Webb was arrested for shooting and was sentenced to hang (in fairness, the shooting was likely a case of self-defense).  Deputy Rudabaugh also found himself in jail.  Eventually, Webb and Rudabaugh escaped from prison.  In time, Rudabaugh was shot to death in Mexico and Webb perished from a smallpox infection.

More than leading the Dodge City Gang, Hyman G. Neill was up to his armpits in thievery, murder, and who knows what else.  One thing we know for sure is that Hoodoo Brown was a cowardly back shooter —the kind of man we would likely encounter in the REAL old west —and he looked nothing like film star Randolph Scott.