David Colbert McCanles (the family name was later changed to McCandless) was born in 1828 in North Carolina.  He was the son of James M. McCanles and Rachel Alexander.  It has been said that before moving his family west, he served as the sheriff of Watauga County, North Carolina but there is much about David McCanles that we are uncertain about.  We believe that McCanles and his brother James were traveling westward in 1858 intending try their hand at prospecting in Colorado.

In Nebraska, McCanles encountered several disappointed men who had also gone to Colorado expecting to strike it rich, but who were then returning to their homes in the east with nothing to show for their efforts.  Their stories were enough to convince McCanles to change his plans.  He instead purchased the property of Mr. S. C. Glenn, who operated a way station along the west bank of Rock Creek —known simply enough as the Rock Creek Station.

The property wasn’t much to look at, consisting of only a small cabin, a barn, and a small make-shift store.  McCanles continued to operate the station and, noting the difficulty pioneers were having getting across the creek [1], he constructed a toll bridge, which added to his growing wealth.  He also constructed a cabin and dug a well on the east side of Rock Creek, which he named East Ranch.  The following year, McCanles either sold or leased the East Ranch to the Russell, Waddell, and Majors Company (RWM) (a freight and overland stage company [2]), who in turn hired Mr. Horace G. Wellman as their station keeper, and Mr. James W. Brink as their stockman.  If McCanles sold the property to RWM (rather than leasing it), the terms of the sale obligated RWM to make installment payments to McCanles. 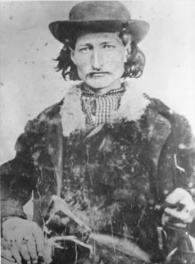 In 1860, James Butler Hickok worked for Russell, Waddell, and Majors driving a freight wagon between Independence, Missouri and Santa Fe, New Mexico.  Hickok found the road blocked by a Cinnamon Bear (related to the Black Bear) and her two cubs.  He dismounted the wagon, approached the bear, and fired a shot into its head.  Unfortunately for Hickok, the round glanced off the bear’s head and it attacked him.  Hickok did manage to kill the bear after a harrowing struggle, but he was badly injured with a crushed chest, broken shoulder, and a mauled and broken arm.  He was bedridden for several months and while recuperating, the company sent him to Rock Creek to work as a stable hand under “Doc” Brink.

McCanles was a known bully who, having taken a dislike to Hickok, regularly harassed him because of his slight (feminine) build and unflattering looks.  McCanles called Hickok “Duck Bill” due to the protruding shape of his face.  McCanles is also known as the leader of a gang of murdering outlaws who are said to have robbed banks, trains, and rustled horses and cattle.  The only evidence we have that McCanles did any of these things is Hickok’s claim (see below).  Beyond this, there is no evidence that McCanles led an outlaw gang or robbed any banks or trains.  It would not have been unusual for a western rancher to help himself to other people’s cattle, particularly in an area settled by German immigrants.

RWM fell behind in their payments to McCanles, prompting him to confront the station master.  On 12 July 1861, McCanles arrived at the station with his 12-year-old son, Monroe, cousin James Woods, and one of his employees named Jim Gordon.  McCanles pounded on the door the cabin and was met by the station master’s wife, Mrs. Wellman.  James Hickok was in the cabin, as well.  Either Wellman was away at the time or refused to meet with McCanles.  In any case, whether by force or invitation, McCanles entered the cabin demanding payment.  Voices were raised, and no doubt threats were made.  Hickok shot McCanles, killing him.  Monroe rushed from the cabin and hid himself in the nearby creek. Hickok stepped outside of the cabin and shot both Woods and Gordon, who like McCanles, were not armed.  Woods and Gordon were wounded, but still alive when “Doc” Brink killed Gordon with a shotgun blast, and Mrs. Wellman finished Woods off by hacking him to death with a garden hoe.

In an 1867 interview for Harper’s Monthly, Hickok later claimed that he single-handedly killed nine desperadoes known as the McCanles Gang.  This particular fairy tale, along with other embellishments made by Hickok, contributed to Hickok’s reputation as a gunfighter.  Hickok’s luck ran out on 2 August 1878 when he was assassinated by Jack McCall while playing cards in Deadwood Gulch, Dakota Territory.

Fifty or so years later, the U. S. Navy awarded David McCanles’ grandson Byron the Navy Cross in recognition of his courage while commanding the USS Caldwell (DD-69) during World War I.  Byron McCandless was also responsible for several inventions, including a heavy tractor, a camera, portable lamps, and a light-projection system.  Byron’s son was Rear Admiral Bruce McCandless, who was awarded the Medal of Honor for heroism and taking command of the cruiser USS San Francisco (CA-38) after Rear Admiral Daniel J. Callaghan and Captain Cassin Young (and their staffs) were killed on the bridge during the naval Battle of Guadalcanal.  His son, Navy Captain Bruce McCandless II served 13 days in space as an astronaut.

[1] Crossing this or any creek was a tedious process that involved raising heavy wagons off the ground by the use of a hoist, swinging them over the bank of the creek, lowering them down into the creek, pulling the wagon across the creek, and repeating the process to move the wagon out of the creek onto the opposite bank.  McCanles charged from ten to fifty cents, depending on the size and weight of the wagon.

3 Responses to The McCanles-Hickok Shooting

"The Nazis steal your life; the Russians steal everything and take your soul." -Warren ... and of course, "Two people can keep a secret if one of them is dead.” -Mark Twain