It is difficult to determine which of these positions has the greatest prestige: a sergeant major of Spanish Marines [1], or a Governor of Texas.  Martín de Alarcón served in both capacities.  He also served as a Knight of the Order of Santiago and was the founder of present-day San Antonio, Texas.

Before arriving in the Indies, Alarcón served Spain in North Africa as a member of the Armada Española.  In 1691, Alarcón was appointed sargento mayor of a company of naval infantry in Guadalajara, which he commanded for some time.  He was later appointed Alcalde (mayor) and capitán a guerra (magistrate empowered to supervise military affairs) of Jacona and Zamora, in the province of Michoacán in New Spain. 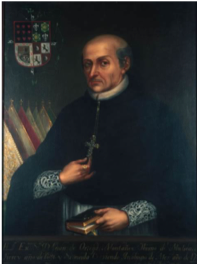 In 1696, Viceroy Juan de Ortega y Montañez appointed Alarcón as capitán a guerra and protector of Indians in the locale of Mazapil.  Subsequent viceroys continued to employ his services as an agent of pacification on the northern frontier of New Spain, especially in the environs of Saltillo (present-day northern Mexico).

Alarcón was appointed to two terms as governor of the Spanish provinces of Coahuila and Texas, the first being in 1705 when there were no Spanish settlements in Texas.  The last of the original Catholic missions in East Texas were abandoned in 1699 and the French had been busy establishing settlements west of the Mississippi River.  Spanish authorities were rightly concerned that the French intended to expand into Texas and in 1707 the Viceroy of New Spain ordered all provincial governors to prevent the entry of foreigners and their goods.

Alarcón proposed to reestablish one of the missions along the Rio Grande, relocating Misión San Bernardo into Texas and placing it along the Frio River.  Nothing came of his recommendation, however. Later that year, he authorized an expedition into Texas to dissuade the Indians from becoming friendly with the encroaching French.  Spanish troops reached only as far as the Colorado River, but spent some time exploring the area around the San Antonio River.

Early in 1716, the Spanish government expressed a greater interest in the territory of Texas and by way of exercising its authority, authorized a second expedition in order to convert the Hasinai people of East Texas to Christianity.  Four missions and a presidio were established and several of the soldiers assigned to the presidio brought their families; it was the first time Spanish women entered Texas.

On December 9, 1716, Viceroy Marqués de Valero reappointed Alarcón in Mexico City as commander of Presidio San Francisco de Coahuila and as governor of the province of Texas.  As chief executive, Alarcón was to resupply Spaniards who had gone to Texas earlier in 1716 under the command of Domingo Ramón.  He was soon informed that the missions were in dire straits, as there was a paucity of provisions needed to sustain them.  The supplies needed would have to come from the nearest Spanish settlement, which was located some 400 miles away at San Juan Bautista.  Alarcón looked first to the headwaters of the San Antonio River, as it was an area the Spanish had mapped in 1707 —and it was already home to a large community of Coahuiltecans.

Artist’s rendition of the Alarcon expedition

Alarcón journeyed to San Juan Bautista, which was to be the shipping point for any attempt to resupply the missions.  Along the way he received a letter from a Padre by the name of Olivares informing him that a Frenchman named Louis Juchereau de St. Denis had established an illegal trade network along the Rio Grande.

Alarcón arrived at Saltillo de Coahuilain June 1717 where he decided to delay several months while evaluating the activities of St. Denis.  Naturally, during the period of Alarcón’s inquiries, St. Denis was imprisoned.  At the conclusion of Alarcón’s inquiries, he was unable to prove conclusively that St. Denis was guilty of anything beyond being French, nor was there any evidence of collusion or negligence by the soldiers of the presidio. Accordingly, Alarcón released St. Denis, who wasted no time returning to Louisiana.  See also: Spanish Texas —Part II; Spanish America.

By the time Governor Alarcón had completed his inquiries of St. Denis, winter made it impractical for him to proceed into Texas.  However, in April 1718 Alarcón crossed the Rio Grande with ten families consisting of 72 Spanish citizens.  His entourage also included 548 horses, 6 barren of mules, and other livestock.  In the next month he assisted Padre Antonio San Buenaventura y Olivares in the founding of Misión San Antonio de Valero, which everyone today should recognize as the Alamo.  One mile further on, Alarcón founded Presidio San Antonio de Béxar [2].  Adjacent to the presidio Alarcón chartered a new municipality, which he named Béxar from which the City of San Antonio emerged.  San Antonio became important to Texas because at that time, it was the only villa in Texas and the colonists that settled there relied on the cohesion it provided to survive the wilderness of early Texas.

With this new settlement established, Alarcón continued further on to re-provision and inspect the East Texas missions.  Not only was he involved in replenishing much needed supplies, he was also tasked to resettle the Indians —which from everything I have ever read about Native Americans, was analogous to herding cats.

During his travels, Alarcón continued to investigate the activities of the French.  On 28 May 1718, Alarcón wrote to Jean Baptiste Bénard de La Harpe and advised him to withdraw all French trading posts from Spanish territory at once.  In response to this correspondence, de la Harpe invited Alarcón to try to remove the French from their “Texas” territory.  A robust series of letters ensued, but Alarcón took no military action to forcibly remove the French —essentially because the governor did not have sufficient forces to press the issue.

Meanwhile, the missionaries were becoming increasingly desperate as they waited the arrival of Alarcón and much-needed supplies.  The padres appointed two members of their order to carry a message to Spanish authorities in Mexico City and not only did they detail their deprivations and the perceived slowness of Alarcón’s response, they also mentioned their fear that France would soon extend their settlements into Texas. 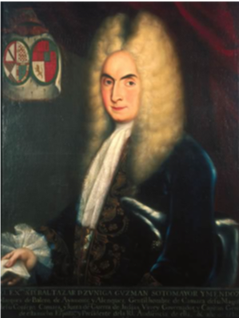 In May 1719, the Alarcón party began its return trip to the Mexican interior.  Between the Brazos River and Colorado River they encountered what he called the Rancheria Grande.  It was an area peopled by several Native groups.  It was Alarcón’s intention to establish a trade relationship with these people, whose leader was named El Cuilón.  Governor Alarcón preferred to refer to him as Juan Rodriguez. Alarcón appointed Rodriguez Chief of the Rancheria and offered him a baton, the symbol of overall commander.  El Cuilón was no doubt suitably impressed.

As Alarcón made his way back to Coahuila, a group of French soldiers took control of the mission San Miguel de los Adeas from its single Spanish defender.  The French soldiers told this unhappy fellow that hundreds more French soldiers were en route. Alarmed about this invasion, area colonists, missionaries, and soldiers fled to San Antonio.  Upon their arrival, the missionaries sent a scathing letter to Baltasar de Zúñiga, 1st Duke of Ariónthe, Viceroy of New Spain, blaming Alarcón for their difficulties and for the French usurpation of Spanish territory.  Alarcón was relieved of his office on December 19, 1719.  We do not know what happened to him afterwards.

[1] The Spanish Marine Corps (Infanteria de Marina) is responsible to the Spanish armada for conducting amphibious warfare.  This organization was formed in 1537 by Charles I of Spain (also, Charles V Holy Roman Emperor), which makes it the oldest Marine Corps in existence.  Its model was the Companions of the Sea of Naples (Companias Viejas de Mar de Napoles).

[2] The word Béxar (also, Bejar) (universally mispronounced by Texans as Bear —and I think intentionally so) is the name of a town in the Spanish province of Salamanca, which was founded in pre-Roman times.  Bejar became a Moorish fort during the Eleventh Century, and the name was carried to New Philippines and the Province of Tejas in New Spain and now commonly used to refer to the Presidio San Antonio de Béxar, Misión San Antonio de Valero, the Villa de Béxar and after the arrival of the Canary Islanders, the Villa of San Fernando de Béxar.  These were a group of settlements on the San Antonio River often referred to as San Antonio de Béxar the county of Béxar.

2 Responses to The Sergeant Major

This WordPress.com site is for insights, observations and commentary on various issues. We are part social critic, part philosopher, part dreamer, and part seeker after elusive truths.

Just writing some poems. No pics, no GIFs, no vids. Keeping it simple.

This blog is dedicated to Andrew Breitbart. I believe this header picture was taken by Mr. Z on a beautiful Santa Monica day! Jersey Jack, we miss you!

shining a light on global issues