Of Conflict and Sorrow

The hostile raid at Fort Parker included Comanche, Caddo, Waco, Kichai, Penetekas, and Wichita Indians.  During the raid, Cynthia Ann was witness to the murder of her baby sister, Orlena Parker.  The child was four months old.  When the baby would not stop its crying, a warrior seized the child and smashed her head against a tree.

Over the next six years, most of the captives had been ransomed, but not Cynthia Ann.  Cynthia was sold to a Comanche family who lived on the Panhandle region of Texas, in the vast reaches of the Llano Estacado.  At first, she was beaten and treated as a slave, but she was eventually accepted into the family.  They renamed her Nadauh.  She thus became part of the Tenewa Comanche band.

A few years later, in 1840, a Comanchero trader was conducting business with a Tenewa band when noticed the presence of a properly dressed squaw who appeared to have a white complexion.  He had heard about the kidnapping of Cynthia Ann Parker; he knew that a reward had been posted for information on her whereabouts.  The Comanchero attempted to converse with the young woman, but she spurned him.  Returning to New Mexico, the trader soon spread the word about his discovery. This information eventually made its way to Texas authorities.

Unrelated to this encounter, in January of the same year, a delegation of Comanches made their way to San Antonio.  They wanted to discuss terms for peace.  Years of war and smallpox epidemics had taken their toll upon the plains Indians.  The Comanche spokesman was a chief named Muk-wah-ruh (meaning: spirit talker).  He wanted Texas’ recognition of the Comancheria as the rightful homeland of the Comanche, and they wanted the Texians to keep settlers out of their home territory.  As a demonstration of their good faith, the Indians returned a white captive, a boy. 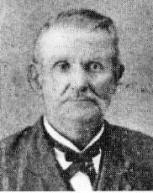 The delegation was received by Colonel Henry Wax Karnes, a distinguished veteran of the Texas Revolution.  Karnes listened to the chief’s story, and he agreed to a negotiation, but he warned Muk-wah-ruh that a lasting peace could only be possible when the Comanche gave up their white captives.  Karnes believed that the number of captives held were around 13, but there was no way he could be certain about this.

A further meeting was arranged for mid-March 1840.

Texians did not realize at the time that the Comanche were not a unified nation.  There were 12 formal divisions and 35 independent roaming bands, which were also called rancherias or villages.  While the Comanche were bound together in various ways, this did not include the authority of one group over any other.  This meant that Muk-wah-ruh could not speak or negotiate for any other Comanche group.  The Texians also did not realize that many captives were often assimilated into the tribes; they were adopted by tribal families and themselves became part of the Comanche culture —and were not, thereafter, considered white captives.

Meanwhile, Texas Secretary of War Albert Sidney Johnston instructed Karnes to take the Comanche delegation prisoner if they failed to deliver all captives.

Despite being warned by the war chief Buffalo Hump that the whites could not be trusted, Muk-wah-ruh led 65 Comanches, including women and children, to San Antonio on the agreed date for peace talks. The Indians were dressed in their finery, their faces painted, and they proudly strutted to the Council House. They brought with them one white captive, a female, and several Mexican children.

The white female was 16-year old Matilda Lockhart [1]; she had been held for 18 months.  She was placed in the care of Mary Maverick.  The Texians questioned Lockhart, who testified that she had seen 15 or so other captives at the Comanche’s principal camp several days before.  She told the Texians that the Comanche wanted to see how high a price they could get for her before deciding whether to bring in the other captives, one at a time. This was a point of contention among the Texians because they believed that it violated their agreement with Muk-wah-ruh.  The Comanche had a different view, since Muk-wah-ruh did not have authority to speak for other tribes.  The Texians took the Indian delegation to the Council House, which adjoined the local jail. 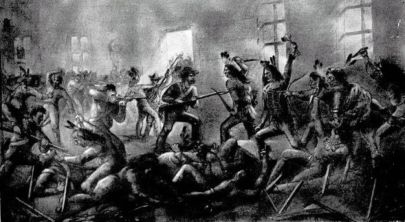 At the Council House, the Texians demanded to know where the other captives were.  Muk-wah-ruh responded by saying the other prisoner were held by various bands of Comanche.  He assured the Texians that he felt sure that the other captives could be ransomed, but that it would cost the Texians a great deal of supplies, including ammunition, blankets, and cooking utensils.  He finished his talk by saying, “Now, how do you like these words? [2]”

Pursuant to General Johnston’s instructions, Colonel Karnes ordered the Indians taken prisoner.  Immediately upon learning that they were to be held as hostages, the Indians drew weapons to fight their way out of the Council House.  Texians opened fire.  Comanche women waiting in the courtyard began losing arrows; one Texian spectator was killed. Texians fired on escaping Indians, shooting Indians without regard to whether they were Comanche or not, and without regard to age or sex.  Thirty-five Comanche were killed, including three women and two children. Twenty-nine were taken prisoner.  Seven Texians died, including a judge, a sheriff, and an army lieutenant; ten more received wounds.  The next day, the Texians released a single Comanche woman and instructed her to return to her camp and report that the remaining Comanche prisoners would be released if the Comanche released the 15 white captives and Mexicans who were known to be held captive.  The Comanche were given twelve days to return the captives. 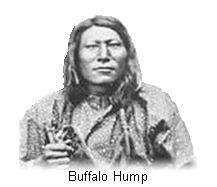 As soon as news of the Council House fight reached the war chief Buffalo Hump, he ordered 13 of the captives tortured to death.  The captives included Matilda Lockhart’s six-year-old sister, who was roasted to death over a spit.  Only three captives were spared, those being whites that had been adopted into the tribe. It was in response to the Council House fight that Buffalo Hump initiated the so-called Great Raid of 1840, leading hundreds of Comanche warriors on raids against Texian villages. Twenty-five Texians were killed by rampaging Comanche.  Texian militia responded to the raid, leading to the Battle of Plum Creek [3] in August 1840, which ultimately stopped the murderous raids.

[1] The Lockhart story has a confused history. Maverick later described her as woman horribly disfigured by her Comanche captors, but there are no known documents of the time that make this claim.  Matilda died in 1843, aged 18 years.

[2] It is unlikely that Muk-wah-ruh intended his words to sound arrogant, but that is how they were received by Texian officials and they are what initiated the violence at the Council House.

[3] Near Lockhart, Texas —no connection to Matilda Lockhart.

6 Responses to Of Conflict and Sorrow