John King Fisher, known in his adult life as King Fisher, was born on an unknown date in October 1853.  His parents were Jobe and Lucinda Warren Fisher.  Jobe was a cattleman who owned and operated two freight wagons. Lucinda died when King was still an infant; his father later remarried a woman named Minerva.  At the end of the Civil War, the Fisher family moved from Collin County to Williamson County, just outside Austin, Texas, and a short time after that, Minerva also passed away.

Jobe Fisher relocated to Goliad, just west of Victoria, Texas. There, the Fisher’s were joined by Jobe’s mother, who helped her son raise the children.  As in many cases in early Texas, John Fisher had a rough childhood. As a young man, he was restless, handsome, popular with the ladies —and he associated with a rough crowd.  Around 1869, Jobe sent his son to live with his brother James.  Two years later, King Fisher was arrested for horse theft and was sentenced to two years in prison.  Because of his youth, however, he was released later in the same year.

After King’s release from jail, he began working as a ranch hand.  Incessant raids, lootings, and assaults directed toward Texas ranch and farm families by Mexican bandits led to King’s participation as a member of local sheriff’s possés.  He enjoyed this kind of activity, and he began to think of himself as a fast gun. His attire became somewhat ostentatious [1]; he carried ivory handled pistols, and with time he developed proficiency with sidearms.  In time, King Fisher began to associate with known outlaws which engaged in frequent rustling forays into Mexico.  As in one of the never-ending stories of crime life, the gang squabbled about how to divide their spoils.  More or less to emphasize his own point of view, one of the irate outlaws drew his pistol. In the gunfight that ensued, King Fisher shot the outlaw and two of his accompanying bandits.  Being the winner of this disagreement enabled Fisher to take charge of the gang, and over the course of several months, the Fisher gang killed seven more Mexican bandits.

King Fisher purchased a ranch on the Rio Grande near Eagle Pass, Texas. The ranch was right on the border with Mexico, perfectly placed as a base of operations in Texas and Mexico. Still, King rarely perpetrated acts of violence or theft against other Texas.  He preferred raids into Mexico, whether in retribution for Mexican raids into Texas or simply because the Mexican ranches were easy pickings, I don’t know.  What I do know is that this was a time of constant raiding back and forth between Texas and Mexico, a time of common place murder and mayhem, of looting and raping, and to the victor go the spoils.

In these days, there was not much law in South Texas.  Settlers, feeling ignored by state and county authorities, began to organize themselves somewhat in defense leagues—or, if you prefer, rival gangs.  All this really accomplished was increasing ill-will between Texans and Mexicans, and among Texans themselves.  The situation made it difficult for the Texas Rangers to establish lawful authority over South Texas.

The arrival of Leander H. McNelly in South Texas changed the foregoing situation.  Ostensibly, Captain McNelly’s focus was to quell the activities of Mexican bandit leader Juan Cortina, but at the same time, McNelly realized that King Fisher was also part of the problem.  McNelly led his rangers to the Fisher Ranch and arrested its owner.  McNelly didn’t want to take Fisher into custody, so he sat him down and made an agreement with him.  As a result, Fisher’s frequent raids into Mexico ceased and, whatever it was that McNelly told him, Fisher soon retired from his outlaw ways.  He became a legitimate and lawful rancher —the word lawful having a somewhat subjective connotation.

Fisher King never lost his edge with a side arm.  In 1878, an argument developed between Fisher and four Mexican vaqueros.  Fisher clubbed the first man with a branding iron; then, as the second man went for his gun, Fisher drew his own pistol and, shooting straight and true, killed the man instantly.  Fisher then spun around and shot the other two men, who evidently did little more than set themselves on the corral fence.  It was the kind of stuff one might find in dime novels of the time [2].

Fisher may have been a gentleman rancher, but he was never quite the good boy his grandmother hoped he would become.  He was arrested on several occasions for public altercations, several of these involving local lawmen.  On one occasion, he was charged with “intent to kill” —charges that were dropped when no witnesses came forward to tell what the knew.  In spite of being a hot head, he was well liked in South Texas.  In 1876, Fisher married Sarah Vivian; together they had four daughters.  It was time for King Fisher to settle down.

In 1883, Fisher served as acting Sheriff of Uvalde County.  During this service, he was called upon to investigate a stagecoach robbery that allegedly involved Tom and Jim Hannehan. He trailed these men to their ranch near Leakey, Texas.  Fisher wanted to question them about the allegations, but they resisted his arrest. Fisher shot and killed Tom, and the smarter of the two, Jim, surrendered.  Having taken Jim Hannehan into custody, Fisher discovered the stolen loot and returned it to the rightful owners [3]. 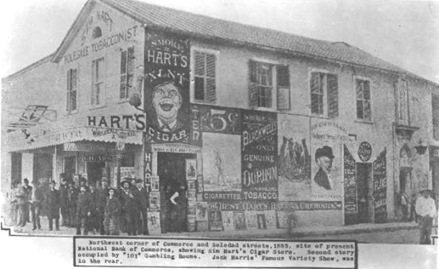 Jack Harris’ Variety Theater was in the rear of this building

In 1884, King Fisher traveled to San Antonio on business.  There, he came into contact with his old friend Ben Thompson [4].  Thompson was somewhat unpopular in San Antonio owing to the fact that he’d previously killed a popular theater-owner named Jack Harris.  A feud over that killing had been brewing between Thompson and friends of Harris—which is generally the way feuds work.  On the evening of 11 May, Fisher and Thompson attended a play at the Turner Hall Opera House.  At around 10:30 p.m., they went to the Vaudeville Variety Theater.  Local lawman Jacob Coy sat with them.  Thompson wanted to see Joe Foster, also a theater owner and a friend of the departed Harris.  Foster was also one of the fellows harboring a grudge against Thompson. Thompson set up a meeting with Foster’s partner, Billy Simms.  Simms directed Thompson and Fisher upstairs to meet with Foster.  Coy and Simms soon joined them in the theater box, but Foster refused to speak to Thompson.  Fisher noted that something was amiss.  Simms and Coy stepped aside; as they did, gunfire erupted from another theater box. A hail of bullets struck Thompson and Fisher.  Thompson fell on his side, and either Coy or Foster approached him and shot him in the head. He died immediately.  Fisher was hit thirteen times, but got off one shot, wounding Coy, and crippling him for life.  Foster, while drawing his pistol for the coupe deGrasse over Thompson, managed to shoot himself in the leg, which was later amputated.  Foster died shortly afterwards.

San Antonians, ever known for their peaceful nature, demanded that a grand jury investigate the shooting, but no action was ever taken.  San Antonio police and the local prosecutor showed very little interest in the case and it, along with Fisher, was laid to rest [5].  Fisher was 30 years old.

[1] He was known to wear a sombrero with a gold braid, embroidered vests, silk shirts, and crimson sashes.  His most famous trademark was a pair of Bengal tiger skin chaps.  His silver mounted two-gun holsters sported ivory handled pistols. He also wore silver spurs mounted on silver bells that always announced his presence nearby.

[2] A reporter named Carey McWilliams once said that he asked King Fisher how many notches he had on the handles of his guns (denoting one kill for each notch).  Fisher is said to have replied, “Thirty-seven, but not counting any Mexicans.”

[3] For years after King Fisher’s death, Tom Hannehan’s mother traveled to Fisher’s grave, built a fire above it, and danced around singing chants of one kind or another —proving where the Hannehan brothers obtained their wackiness.

[4] Ben Thompson was an Englishman who immigrated to the United States in 1851.  He was a lawman and a gunfighter.  He once explained his success as a gunman: “I always make it a rule to let the other fellow fire first.  Now, if a man wants to fight, I argue the question with him and try to show him how foolish it would be.  If he can’t be dissuaded, why then the fun begins but I always let him have the first crack.  Then when I fire, you see, I have the verdict of self-defense on my side.  I know that he is pretty certain in his hurry to miss. I never do.”

[5] After Fisher’s death Deputy Sheriff Tom Sullivan of Medina County was asked his opinion about Fisher and Thompson.  After giving the question a measure of thought, he said, “They called King Fisher and Ben Thompson bad men, but they weren’t bad men —they just wouldn’t stand for no foolishness.”

6 Responses to A Dangerous Dandy

Welcome to Inspirational Quotes by MJ

This blog is dedicated to Andrew Breitbart and my wonderful America-loving husband. I believe this header picture was taken by Mr. Z on a beautiful Santa Monica day! (and most of them are!) The GEORGIA SENATE RACE DONATION LINKS ARE: https://kellyforsenate.com/ https://perduesenate.com/ PLEASE GIVE!

READING INTO THE PAST ... WELCOME TO MY HISTORY & BOOK BLOG!