As with many a young man in the mid-1800s, John Reynolds Hughes left home at an early age to find his own way in the world.  He was but fourteen years of age.  At the beginning of his adult life, he led the life of a ranch hand —or as some today might say, that of a cowboy [1].  Initially, he worked on a cattle ranch near his home in 1868, but eventually an invisible hand pulled him further west into the Indian territories.  For four years, he lived among the Choctaw and Osage nations, and then he moved on to the Comanche Nation in 1874.  He traded for goods and commodities near Fort Sill and became friends with Quanah Parker [2].  After living for six years in the Indian territory and a brief time working as a hand along the Chisolm Trail [3], Hughes bought a farm near Liberty Hill, Texas and entered the business of raising horses.

In 1886, the 31-year old rancher discovered that a number of his horses, and those of neighboring ranches, had been stolen; he wanted them back.  He set out to find the men who took them.  After trailing the thieves for several months, he finally located them.  Some of these men he killed, others he turned over to authorities in the New Mexico territory.  He returned the horses to his neighbors and resumed the business of his ranch.  By now the word was out that John Hughes was not a man to trifle with.  This reputation brought him to the attention of Ira Aten [4] of the Texas rangers.

In 1887, Hughes accompanied Aten in the pursuit of the murderer Judd Roberts.  The two men located Roberts, who when confronted by Hughes and Aten was killed in a gunfight.  Based on Aten’s recommendations, John Hughes was subsequently recruited by the Texas Rangers.  He accepted his commission at Georgetown, Texas on 10 August of that same year and was assigned to Company D, The Frontier Battalion [5].  Company D was located at Camp Wood [6] and tasked to patrol the border area between Texas and Mexico. 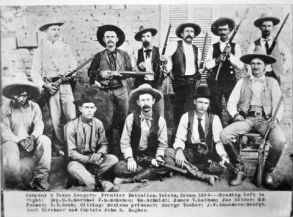 After Texas Ranger Captain Frank Jones was killed in 1893 [7], Hughes was commissioned as the Captain of Company D.  He quickly gained the reputation of a relentless pursuer of outlaws, demonstrated after Jones’ death when Hughes led his company in tracking down the killers, most of whom were of the Olguin family.  Based on information provided to him by undercover agent Ernest St. Leon, Hughes tracked down 18 suspects and either killed them in shootouts or by hanging them from the nearest tree.  In fact, Hughes reputation was such that not even the infamous murderer “Deacon Jim” Miller [8] wanted to tangle with him.

After Hughes’ retirement in 1915, an author by the name of Zane Gray approached him for an interview.  Hughes and Gray got along well enough.  The result of this meeting was a Zane Gray book titled Lone Star Ranger,which while fiction, was modeled on the exploits of John Hughes and the Rangers of Company D.  Other books soon followed: The Border Boss, by Jack Marin (1942), Trails and Trials of a Texas Ranger, by W. W. Sterling, Encyclopedia of Western Gunfighters, by Bill O’Neal, and The Law Comes to Texas, by Frederick Wilkins.  Many western enthusiasts today believe that John Reynolds Hughes was the inspiration for the Lone Ranger character that found its way in to early films, a television series, and a remade modern film of the same name.

Hughes never married; by the 1940s, he was in poor health and most of those who were closest to him had already passed away.  At the age of 92, Hughes was living with his niece in Austin, Texas.  He committed suicide on 3 June 1947.

[1] The term cowboy, when used in the 1800s, was meant as a pejorative since cow boys were believed to be toughs, bullies, gunfighters, back-shooters, or men of ill-repute.  The good guys who pursued this line of work were simply called “hands,” ranch hands, or trail hands.

[2] Quanah Parker (1845-1911) was the last chief of the Quahada tribe of Comanche.  He was the son of Peta Nocona and Cynthia Ann Parker. He became a major figure in Comanche resistance to white settlement and in the tribe’s adjustments to reservation life.

[3] The Chisholm Trail was the major route out of Texas for livestock between 1867 and 1884.  The cattle trail played a major role helping Texas recover from the economic effects of the American Civil War.

[5] The Frontier Battalion was composed of six companies of Texas rangers (each company having 75 men).  The battalion was formed in 1874 to protect the frontier of Texas.  Camps were established at locations along the entire frontier area with pony riders maintaining continual communications among them.

[6] Established as a US military outpost in 1857, Camp Wood was located on the Nueces River near the present-day town of the same name.  The purpose of the outpost was to protect the San Antonio-El Paso route and the Rio Grande Valley from Indian raids.  It was also near the ruins of Mission San Lorenzo de la Santa Cruz. Camp Wood was named for George W. F. Wood.  After the Civil War, Camp Wood was periodically used as an outpost by the Texas Rangers.

[7] Texas Ranger Captain Frank Jones, Corporal Kirchner, Privates Tucker, Aten and Saunders, and El Paso County Deputy Sheriff Bryant attempted to serve an arrest warrant on Jesus-Maria Olguin and his son, Severio, for cattle rustling.  The Olguin clan were known outlaws and lived in the “no man’s land” on Pirate Island which was situated in the middle of the Rio Grande River between Texas and Mexico across from El Paso County.  As the lawmen approached the small village of Tres Jacales, they observed two Mexican riders flee toward the village, dismount, and enter an adobe building.  As Captain Jones and his men approached, gun fire erupted from inside the buildings and from surrounding brush. Jones was wounded in the thigh and fell from his horse. He straightened his leg out and continued to return fire.  Private Tucker came to his assistance, but Jones ordered his men to save themselves.  Seconds later he was riddled with bullets and died.  Jones was 37-years old.

[8] James Brown Miller (aka Deacon Jim) (1861-1909) was a professional killer, said to have murdered 12 people during gunfights and assassinations.  He was called Deacon Jim because he regularly attended the church, did not smoke or drink.  Having assassinated a popular former US marshal, Miller and three other men were lynched in Ada, Oklahoma by a mob of highly irate town citizens.

You Can save your marriage with the right knowledge

This blog is dedicated to Andrew Breitbart and my wonderful America-loving husband.