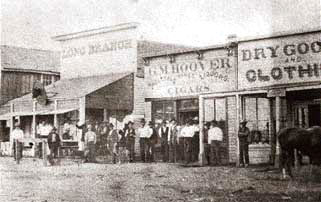 Nearly everyone interested in the old west is familiar with the Long Branch Saloon in Dodge City, Kansas but what most people don’t know is that the saloon was named after one of its founder’s home towns, Long Branch, New Jersey. William H. Harris was a prominent gambler and saloon keeper who partnered with Chalkley Beeson in the purchase of a saloon, named after Harris’ home town.  The Long Branch was a typical frontier saloon.  No fancy furnishings in the Long Branch … the idea was to drink, gamble, and dally with the dance hall girls.

Whenever we think of old western saloons, we probably recall the way these places were depicted in Hollywood westerns.  Beyond the usual clientele (the cowboys and such), we’d have to add the town drunk, local miners, and soldiers posted to nearby outposts.  The Hollywood version of these watering holes wasn’t too far off the mark, although some had a bit more substance than others.  For example, we might recall the dual wooden doors that swung open to reveal the cowpokes lined up along the bar.  Some of these fellows were puffing on cigars, others were conspiring to shoot the sheriff, and other characters were playing cards at 11:00 a.m.  Outside the saloon we might find a wide boardwalk, and beyond that a filthy street where some folks tied their horses to a hitching rail.  Still, we should probably imagine that the cowboy who earned only $25 to $40 a month wouldn’t be drinking alongside the posh banker, or the dandy gambler (unless the lean-to saloon was the only game in town), and they wouldn’t be doing any of this at mid-morning.

In the Hollywood saloon we should expect to find a long oak or mahogany wood bar; in real life, the bars were more than likely long wood planks set down on top of casks of beer or whiskey.  (Shown right, John Wayne in a saloon scene in the film The Shootist, 1976).  In truth, most saloons were little more than A-frame tents or lean-tos quickly thrown together near road junctions.  Saloons also consisted of two prairie wagons parked side-by-side with a canvas roof.  Gambling tables would be a plus, but these would probably have to wait until the road junction became more of a settlement —the beginnings of a small town.  When that happened, then saloons would become more substantial. 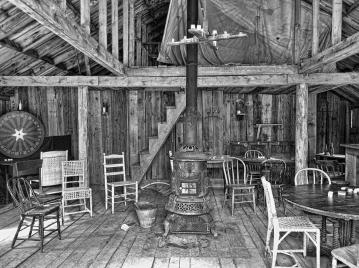 Saloons usually cropped up wherever pioneers set up small settlements, or where trails crossed.  The first establishment of this kind may have been the saloon near Brown’s Hole, which was near the Wyoming-Colorado-Utah border.  Brown’s Saloon was established in 1822; it catered to the mountain men who made their living trapping fur.  Another saloon known to exist in the early 1800s was located at Bent’s Fort in Colorado.  The gold rush prompted more such places, as evidenced by the sudden increase in saloons in and around Santa Barbara, California.  In 1848, Santa Barbara had but one Cantina.  Within a year of the discovery of gold, thirty saloons competed for the miner’s hard-earned nuggets.

I’ve written before about the prevalence of “Bright’s Disease.”  This was a misdiagnosis by physicians who were still in the learning stage of their profession.  Bright’s Disease was actually a serious condition of the liver, and I have little doubt that a destroyed liver was the by-product of “rot gut” liquor.

Whiskey served in the average saloon was a combination of raw alcohol and any number of other ingredients designed to color the liquid. Materials included burnt sugar, chewing tobacco, old shoes, molasses, red peppers, and the heads of snakes.  Whenever the barkeep watered down his whiskey, he used such things as turpentine, ammonia, gun powder, and cayenne peppers. Whoa!

Cactus wine was made from tequila and peyote tea. There was also a concoction called a Mule Skinner, which consisted of whiskey and blackberry liquor.  Other whiskey mixtures were called Tarantula Juice, Coffin Varnish, and Stagger Soup.  To these servings we must add Rye and Bourbon, which came from back east, and beer of course.  Given what we know about the whiskey, beer was probably a better choice.  In the old west, cowpoke didn’t sip his beer—he guzzled it.  This was because the beer went flat within a very short time.  If I’m surprised by any of this, it is probably that more cowboys didn’t die from liver disease.

Speaking of whiskey, we’ve all heard about the low-down rascals who sold this stuff to Indians.  Native Americans called it firewater because merchants would pour a few drops of whiskey onto a fire, which made the fire burn brighter.  This proved that the whiskey was high in alcohol content.  Perhaps nothing destroyed Native American culture as much as alcohol addiction, but it was still only one of several low-down things whites did to eradicate Indians. 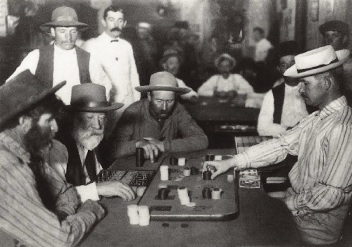 Saloons were also known for gambling —but not poker, as shown on most older films.  Yes, poker was one game, rolling dice was another, but nothing was more popular than Faro from about 1820 to just after World War II.  Faro was so popular during the Civil War that is was offered in more than 150 establishments in Washington, D. C.  While popular, Faro was a dishonest scam.  One individual remarked that if you ever saw a man winning at Faro, he was a shill in league with the Faro dealer.  Faro was also called “bucking the tiger,” or “twisting the tiger’s tail.”  This was because early card backs featured a drawing of a Bengal tiger.  Also, the term “tiger town” was applied to areas where Faro games were widespread.  Several western personalities made their money as Faro dealers, including the Earp brothers, Dock Holliday, Luke Short, and Bat Masterson.  Because they knew how the game was played, these same men were quick to call out a crooked Faro dealer.  What may have made this interesting is that these men were notorious gunslingers.

Gambling and drinking often led to gunplay. Calling out a man as a cheat, even if it were true, would completely ruin a friendly game of cards.  It was for this reason that many of the old west towns passed laws against carrying guns inside the city limits.  In most cases, anyone toting a firearm had to surrender his weapons to either the town marshal or to the barkeep.  The weapons could be collected just before leaving town. It was just such an ordinance that led to the famed shootout at OK Corral in Tombstone, Arizona.

As small-town characters learned to prosper from human vices, the saloon itself began to change.  The transition went from a place to drink, to a place to drink and gamble, to a hotel that offered all of these, and dance hall girls who did more than dancing and singing.  Saloons became 24-hour operations.  Then restaurants were added.  Saloons became a money-making enterprise.

Not everyone was welcome, though.  Chinese immigrants were not allowed in saloons, and neither were soldiers, often blamed for the spread of sexually transmitted diseases.  A respectable woman wouldn’t be caught dead inside a saloon, so people began to assume that any woman found inside a saloon wasn’t respectable.  This attitude, by the way, was prevalent through the end of World War I.  Speaking of the respectable ladies, they’re the ones who led the temperance movement in America.

A well-established saloon was very likely the largest building in town.  For this reason, saloons began to fulfill a secondary role, as civic halls.  The infamous Judge Roy Bean handed down a lot of decisions in his part-saloon/part-court room, and, given Bean’s reputation for drinking, I imagine that trials in Judge Bean’s court were among the shortest judicial proceedings on record.  Why?  Because alcohol would not be served while court was in session.

I find it interesting that several noted old west gunmen and lawmen owned saloons, including Wild Bill Hickok, Bill Tilghman, Wyatt Earp, Bat Masterson, Ben Thompson, Doc Holliday, and Luke Short —to name a few.  Short died of a liver disease, Holliday died from consumption, and Hickok, Tilghman, and Thompson were shot to death by cowardly fellows inside or near a saloon. Only Wyatt Earp and Bat Masterson died of natural causes: Masterson in 1921 from a heart attack at age 67, and Wyatt Earp in 1929 from Cystitis at age of 80.  Hardly anyone knew who Wyatt Earp was until after his death.

Today, the most popular bars in America are those that maintain an old western saloon flavor.

Retired Marine, historian, writer.
View all posts by Mustang →
This entry was posted in Uncategorized. Bookmark the permalink.